...............So a few of us who have made friends on the blogs over the past month or so have decided to do a small but perfectly formed bloghop this afternoon for your Xmas merriment. So are are you sitting comfortably, then I'll begin.
Oh this all feels abit Jackanory, if you can remember back that far. Anyway I digress.Once upon a time in a land not far away there lived a girl and her sister who loved Sunday afternoon children's serials. It was coming to Christmas and there was much excitement in the house because a new and fascinating series was about to begin. Blue Peter had been talking about it and now the programme was about to begin. It was the story of a young boy called Kaye who on his way to his guardian's from school for the Christmas holidays meets a mysterious man who gives him a special gift. This gift was called ''The Box of Delights''............................get the link from yesterday now?..................box and Turkish Delight. 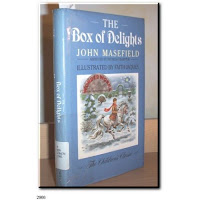 Well for the last 25 years mine and my sister's enthusiasm for this programme and in my case book as well has not wained. Could it be the key themes of Christmas, mystery, thrills and spills and frankly some jolly hockey sticks style hoccum and terrible old fashioned lingo (sorry about the hockey thing Abi!) or else is it the fantasy of wanting to be swept away on a magic whirl of adventure at Christmas?
So the basic story is the box itself which has magical powers to transport people through time. It has the traditional fight against good and evil and the Boy's Own style adventures which Kaye and his friends encounter. There's the mystery of who Abnor and his evil friends are, Kaye's transformation into a deer to travel in the forests with Herne the Hunter and making his friends small to enabkle them to escape from the baddies on a small sail boat. I will never forget the ending either when the children and aunt travel to Hereford Cathdral for a magical Christmas party and carolservice. It was an amazing story. The series itself also adds to the Christmas theme by using the music of The Carol Symphony which is a collection of four preludes, written by Victor Hely-Hutchinson in 1927 and is based on four Christmas Carols:
O Come All Ye Faithful, God Rest You Merry Gentlemen, Coventry Carol and Away in a Manger.

This is a picture of the author John Masefield, who I have discovered was for a time the poet laureate. He also wrote this well known poem which I also love, it's called Sea Fever:

I MUST go down to the seas again, to the lonely sea and the sky,
And all I ask is a tall ship and a star to steer her by,
And the wheel's kick and the wind's song and the white sail's shaking,
And a gray mist on the sea's face, and a gray dawn breaking.

I must go down to the seas again, for the call of the running tide
Is a wild call and a clear call that may not be denied;
And all I ask is a windy day with the white clouds flying,
And the flung spray and the blown spume, and the sea-gulls crying.

I must go down to the seas again, to the vagrant gypsy life,
To the gull's way and the whale's way, where the wind's like a whetted knife;
And all I ask is a merry yarn from a laughing fellow-rover,
And quiet sleep and a sweet dream when the long trick's over.

It even has it's own Facebook site and is 25 years old this year!!!!! If you would like to find out more about the book and series then go here.
The rights have also just been sold for the making of a film version with one of the Harry Potter directors signed to direct. It could never surpass the original though no matter how good it was. There is something quite magical about your first encounter with something and for me this book sums up Christmas.

For me I will quite possibly be watching or reading my copy of this wonderful story and getting all misty eyed over the Christmas festivities. Now please do hop over and meet the gorgeous Amy in Melbourne who has an altogether different read for your delectation.