I was lucky enough to have 2 amazing grandpas, Grandpa Watts was a vicar and Grandpa Sowerby was a manager. They taught me alot when I a child about life in the old days, manners, sweeties, heehee, and how to be a better person. Today I would like to tell you about my Grandpa Sowerby.
He was born in Hartlepool, County Durham and grew up there. After he left school he signed up to become a Coldstream Guard and came to London and was based in Chelsea Barracks. He was one of the sentries at Buckingham Palace and we have photos of him in his full uniform standing still. How did he do that I wished I'd asked him? He loved talking about his time as a soldier but he didn't love talking about the War. Because he had fOught and almost died at Dunkirk.
When I was a little girl, Grandpa had terrible headacheS and he couldn't hear well. The hearing was due to a constant ringing in his ears called tinnitus. IT drives u mad. I can say that with sincerity as my lil sister has the same problem. My grandpa also had quite a bald head and moustache that scratched when he kissed you, but he also had his dimples. I loved Putting my fingers in them as they were in an unusual place, his head. As a child I loved those funny little dimples until the day my mum said they were gunshot wounds. I asked what she meant and she explained that Grandpa has been very seriously wounded at Dunkirk and has pieces of shrapnel still in his head and the ''dimples'' were in fact gun shot wounds he had sustained on the beaches. I can remember being so upset that I thought them something sweet when they were not, they were something so very painful. My dad then told us that Grandpa had been so ill he was not given long to live but that he had recovered amazingly and was given ten years to live. The fact is he lived until the mid-1990s so he actually lived another 50 years.
When I asked my grandpa about the war, he always told 2 stories. The first was how lucky he was to be alive. He had been due to go on leave and his Captain has asked him to swap so my Grandpa went home a week earlier. When he got back to France, his Captain and group of his friends had been killed on a mission and my grandpa always said he was grateful for that weeks holiday or else he too would have been killed. The second story is when he came round from his ordeal in Dunkirk, the first thing he saw was my dad who was a young baby. I think it was the first time he had ever seen him.
My dad and my grandpa were very close and my dad still is extremely saddened by Remembrance Day. He always stands and has a minutes silence no matter where he is. He has my grandpa's medals and pictures in pride of place in his office and we often exchange stories about him. I am proud of my grandpa for what he did for his country and what he suffered as a result. I watch with sadness the deaths of soldiers in our time who are doing the same job my grandpa did all those years ago and as a Christian I find it hard to understand. Today we will remember all those men and women who have fought for and died for their countries. I will remember my Grandpa and all he stood for and did for me. 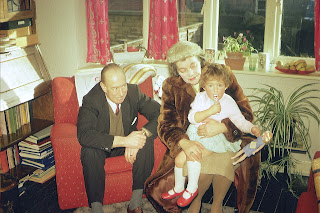 This is me with my Grandpa and Grandma Sowerby