Todays post has it's inspiration from Nancy, hey girl.This amazing crafty woman lives with her hubbie Dan and the kitten, who is just too cute, in the USA and she designs and works for loads of fab scrapbooking people too. Anyway the other week she asked me what a Christmas pudding was. I was aghast, what is a Christmas pudding, I thought the whole world had it on Christmas day. Jusy goes to show doesn't it. Anyway, I wrote a little screed about what it included and she and Dan think it sounds interesting so I thought I'd look up it's history. 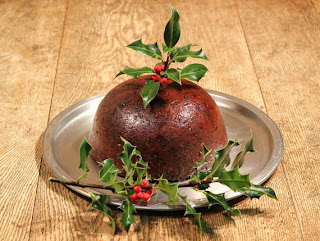 So this is the traditional appearance of a Christmas pudding we know so well in the UK. But what of it's origins?

“The plum pudding is a national dish, and is despised by foreign nations because they never can make it fit to eat. In almost every family there is a recipe for it, which has been handed down from mother to daughter through two or three generations, and which never has been and never will be equalled, much less surpassed, by any other… It is usual, before sending the Christmas Pudding or Plum Pudding to the table, to make a little hole in the top and fill it with brandy, then light it, and serve it in a blaze. In olden time a sprig of arbutus, with a red berry on it, was stuck in the middle, and a twig of variegated holly, with berries, placed on each side … If well made, Christmas plum pudding will be good for twelve months.” From, ‘Dictionary of Cookery‘, by Peter Cassell, published 1875. 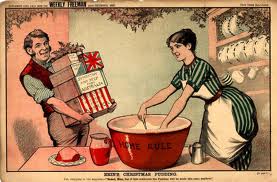 Although it is primarily reaching it's final appearance as we see today in Victorian times, it's history goes way back to the 15th century when it was a means of preserving fruits and also meats. The meat was mixed with bread crumbs, sandalwood and currants and by Elizabethen times prunes were being added. By which time it was known as Pottage pudding or Plum pudding. Over the years, as meat preservation has improved, the pudding has become primarily a fruit consistency and the final pudding we commonly enjoy on Christmas day was born.
The pudding improves with age and if homemade can last for a number of years if well stored,.............we ate a year old one last year and it was truly yummy. The picture below shows it resplendent with flaming liquor, normally brandy. I love lighting the brandy, darkening the room and waiting for the flames to diminish. 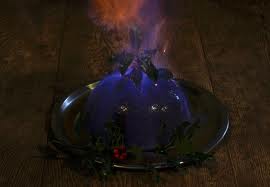 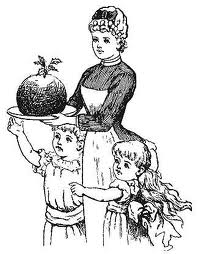 We used to add sixpences which my grandad gave us. We also had lucky charms as well which were placed in the pudding by a grown up, of course.Nowadays, we add whatever money we can lay our hands on and u have to be careful not to bite them or u might chip ur teeth.

I remember very clearly, and the sister will back me up cos we probably had our mouths so open the Blackwall tunnel could fit in it. We were all at my grandad and grandmas for xmas and my uncle and cousins were also staying. After a slapup turkey roast grandma brought out the pudding and appropriate extras. The scene which followed has gone down in family history. My cousins when asked what they would like for pudding said''Everything!'' They therefore had xmas pudd with brandy butter, cream, icecream, custard and any number of extra toppings. My sister and I sat astounded at this amazing feet of gluttony and the fact that they didn't go ''pop'' was an acheivement in itself. To this day on the xmas dessert, we all laugh at what we eat and remember their pudding extravaganza.

I hope I have helped you learn a little about this small part of UK history at Christmas time.


Finally, a BIG thankyou to Sian our wonderful club organiser who has given us so many wonderful things to chat about and remember on these Advent sundays. Hiphip, hooray, hiphip hooray, HIPHIP HOORAY!