Today I thought I would digress from the scrapbooking and talk about something else I love................Art. I was lucky enough to do Study of Art as an O'level at school and we had a brilliant teacher who was passionate about and knowledgeable about his subject. We learnt about the artists as much as the art and how they had lived and worked to produce their work. I remember my first trip to an art gallery in Paris with our group to see the Impressionist paintings. I remember the colour and style and I remember the feeling looking at these pieces of work up close. But it was one particular group of artists who inspired me the most, the Pre-Raphaelites. 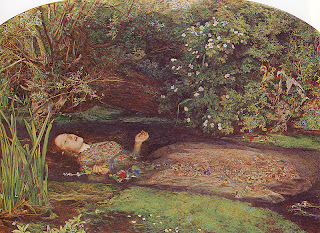 This painting is called Ophelia and was painted by John Everett Millais. Most of us know the story of Ophelia's death by drowning in Hamlet but I have never found a painting to be so evocative. When you learn about how Millais painted the picture it gives you insight into the processes and workmanship which went into it. Firstly he painted the actual scenery on location. The one aim of the Pre-Raphaelites, and there were several, was to paint nature and as up close as possible. So they went and painted where the nature was. The colours are always strong and this is because, unlike other painters of the time, they always painted onto a white painted background on their canvases. As for the figure of Opehlia herself, she was a young woman called Lizzie Siddell the wife of Dante Gabriel Rossetti and often model of the artists. She was painted fully clothed in that dress in a large bath of water which was heated from below to prevent her catching cold although she did apparently become ill after this painting was completed. Not surprisingly you might say. If you want to see this painting it is on permanent display at The Tate Gallery in London and covers virtually a whole wall. It is in an ornately decorated frame and you can see so much detail in this picture that the photo does not do it justice.

When I was confimed, I was given this as a picture in a frame. At that age I had no idea who or what it was or what it represented but it wasn't until I was doing my classes that I learned all about the artist Holman Hunt, and the story around it.


''Behold, I stand at the door, and knock: if any man hear my voice, and open the door, I will come in to him, and will sup with him, and he with me''.
Religion and literature played a huge part in the painter's choice of what they painted. However they also painted social issues as well. The Light of the World is meant to be viewed next to this painting............ 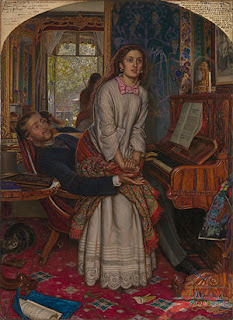 The young woman here could be responding to that image, her conscience pricked by something outside of herself. She is meant to be the mistress of the man holding her back. Much of the imagery in the painting denotes her fallen status and her position in society. 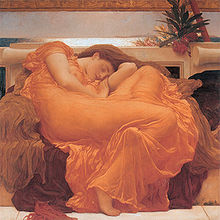 This painting was not a true Pre-Raphaelite picture in that it was painted by a associate of their group Frederic Lord Leighton. My friends bought me a poster of this painting for my 30th birthday knowing how much I love the Pre-Raphaelites and I wake up every morning looking at her on my wall. She is called ''Flaming June'' and is widely held to be Lord Leighton's greatest work.

Many places have Pre-Raphaelite paintings and also design and furniture. William Morris was a Pre-Raphaelite painter before he designed beautiful textiles and ceramics. Many churches have stained glass windows designed by the painters. I was lucky enough to go to an exhibition several years ago by one of our greatest lovers of this group Andrew Lloyd Webber. The exhibit was amazing. To see so many paintings, and pieces from one man's colllection all in one place was truly inspiring. If you ever get the chance to go and see any of their paintings or other works I can assure you you won't regret it.

I may make this a regular series on artists I love as there are a few. I may even throw in the odd bit of poetry, not my own I might add.

Who are your favourites and would a little series be interesting to you?
Posted by JO SOWERBY at 14:42