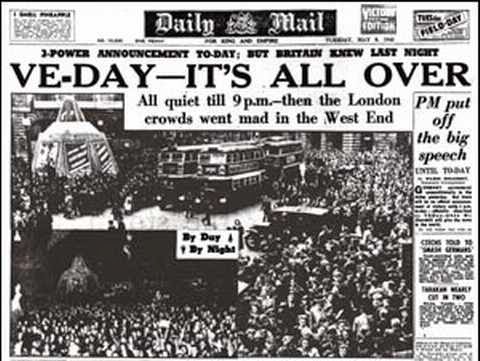 Today, in the UK, begins a 3 day celebration of 70 years since the official end of the Second World War - known as Victory in Europe Day or VE Day for short. That day was to recognise the formal acceptance on 8 May 1945 of the unconditional surrender of Nazi Germany to the Allied Forces.

For many people, this weekend is a huge celebration, but of course we must always remember those families in other countries for whom VE Day was no celebration but a sad day for them.

I wanted to do something to remind people of the event so I asked two lovely, slightly more mature members of my family and a family friend what they remembered of the day. 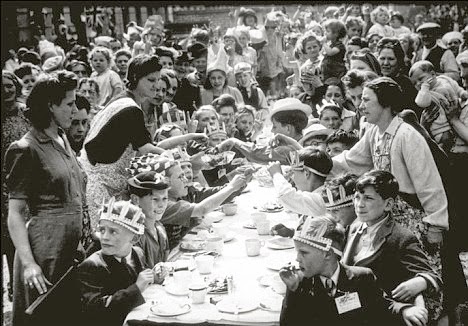 My dad was 6 1/2 in 1945 and lived in Cheltenham. His father had served up until the evacuation from Dunkirk when he was so seriously injured he was medically discharged and spent several years away from his family in London recovering and rehabilitating.

My dad describes how everyone went in fancy dress. My grandad dressed him up as a guard, as my grandad was a Coldstream Guard in the war. He put my dad in his red jacket but it was so big it reached to my dad's feet. Dad's cousins also came and his Aunty and Uncle. Dad remember there being cakes and lemonade which he says he never had during the war, or at least he can't remember having them.

During the street party, dad remembers the coal men who delivered the coal to the house coming dressed as women,


" in drag as they call it now I suppose"

Apparently, they came as Elsie and Doris Waters who were famous as Gert and Daisy on the radio in the 1940s 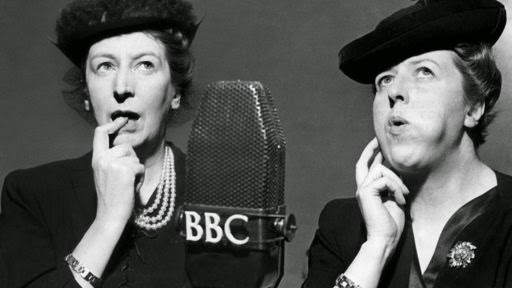 That must have been a spectacle and a half for a little boy to see.

My parent's friend Shirley was a little older at 10 years old and she lived in Leamington Spa on VE Day. Shirley says Leamington was not the quietest of places in the war as they were on the direct bombing path to Coventry and she remembers a German fighter plane shooting at her and mum while they were walking down the street one day. Luckily a cyclist came and threw himself over them to save them. Heroic.

Shirley has a few more memories of VE Day. She says she was lying in bed with her mum, her mum went to open the window still in her nightdress and leaning out there was her neighbour doing the same thing. Shirley remembers these two ladies having a conversation about "It's all over now,it's all over" Shirley's response was "What's all over". Out of the mouth of babes and children!

Shirley can remember listening to the radio announcer Alvar Lidell informing the nation that the war was finally over. Apparently it was the one time everyone had to stay quiet when the radio war reports came on.

Shirley went to street party too dressed as a Gypsy girl with a lovely headdress and her neighbours boy went as Father Christmas.

It was so interesting talking to them about their memories and I'm hoping I might get a chance to look at Shirley's photographs of the street party some day. Sadly my dad didn't have any and as my mum she doesn't remember it at all cos she was only 5. Aww bless.

I love finding out about historical events from the perspective of people who were there, it gives it life. That is why I am a memory keeper. Happy VE Day.