*******WARNING: THE FOLLOWING CONTENT IS EXPLICIT BOTH VISUALLY AND VERBALLY AND SHOULD BE VIEWED ON AN EMPTY STOMACH. IT SHOULD ALSO ONLY BE READ BY THOSE OVER 17 AS THERE ARE IMAGES OF GRATUITOUS ILLNESS. THE BLOG OWNER TAKES NO RESPONSIBILITY FOR YOUR ENTRANCE AND READING OF SAID BLOGPOST. ENTER AT YOUR OWN RISK***********

........................as you all know, in recent weeks, life in Somerset has been a little sickly, in fact to be frank VERY SICK indeed. It all began one Saturday after a lovely day of scrapbooking with friends. I felt a little giddy and had a sore throat but nothing a little Ibruprofen couldn't handle. Overnight, the throat got worse, imagine razors, and little sleep was had, however the Ibuprofen appeared to improve the situation until late morning when rigors developed and we felt literally as if we were going to die. As you know one is a nurse and would NEVER phone the Out of hours doctor without real serious illness. They didn't come out as felt it was just a virus however one felt better after about 4 hours so not too concerned. Monday appeared fine until the dreaded Tuesday when the parents were coming over with shopping supplies!!!!! Now for someone who is surrounded by illhealth regularly, nothing can prepare you for bearing illness all alone and being violently sick is not pleasant when u feel so poorly already. By this stage, we're feeling like something really is wrong but primarily a virus of some ind. Then friend of said ill person laughingly suggests SWINE FLU!!!!!!!!!!! Gasp! Could be we have been struck down with the pig-flu? By inserting said individual's symptoms into the NHS website one is fatally informed of the diagnosis. YES IT IS SWINE FLU.
Now we have to phone our old workplace, not the nicest thing to do, and to get them to organise the Tamiflu tablets for you. Then inform the parents of said diagnosis. Luckily they've had the immunisation so they're safe.
If anyone wants to know what Swine flu is like....................IT IS HORRIBLE...................!!!!! Now for the squemish dont look any further but this is what I looked like. 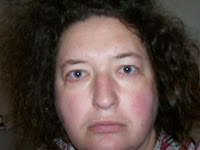 I know, why would you want to see that,? Well, I thought it would demonstrate what a sick blogger looks like. Anyway I had to take my Tamiflu for 5 days, twice daily and now today I am feeling much better. 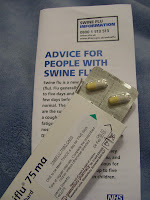 I actually went out to the church centre for an hour and a half to make cards. It was nice to see the real world but an hour and a half was long enough. I came home feeling abit tired and sicky. Anyway I'm feeling tons better than I was last week I can tell you.
I came home and had some Get well soon cards from some friends and while I've been ill, my hyacinths have flowered. They came from Lidl and cost 50 pence..............I mean 3 bulbs in a wicker basket, 50 pence. That is a mega bargain.
In other good news, the benefits got paid, the backdated ones, but they've virtually gone on paying all the outstanding bills. Boooooo! I think I might have made a new friend in Wells, yeah. I am meeting the lovely Abi in a few weeks, and the gorgeous BOY of hers as she can escape from school on a Sunday. Really looking forward to meeting her in the flesh, hope I don't let her down.
The church does a knitting group every 3rd Friday so will be checking that out, I've put my name down for an allotment and also for Brownie leader roles as I did that in Southampton.
Anyway, hopefully we are on the mend now and will return to full blogging capability.
Love and thanx for all your good wishes,