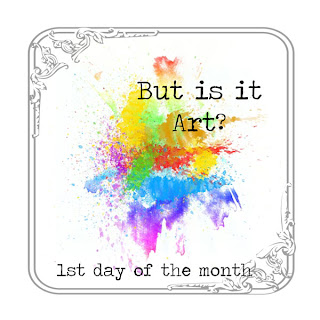 Welcome to the second of this monthly series on favourite art and artists. This will be happening on the first of the month.

Today I am bringing the artist David, a French painter who fascinated me as a teenager when studying art at O level. David was a Neo-classicist working around the times of the French Revolution. In this style of painting, drawing is very important and when you look at these paintings, they appear almost photographic with clear colour and line and hardly a brush stroke to see. Neo-classicists saw rationality and sobriety as important values.

For todays post I have chosen just 2 of his paintings to discuss which are my personal favourites. The paintings represent historical events but also reflect the political developments of the times when David was painting. 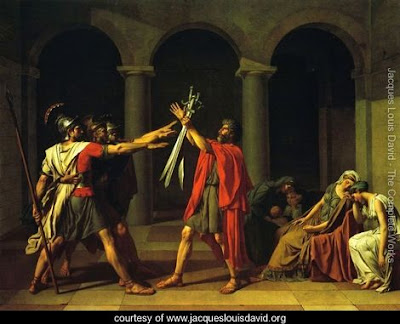 this painting is based on the events which happened in the development of Rome. It tells the story of three sons from the Horatii tribe who are chosen to do battle against another tribe called the Curatii. In this painting, the three sons are swearing an oath upon their swords, held aloft by their father. In Roman times, this oath was said to be ''Those about to die salute you''. The sons are planning to fight to the death for their belief in Rome and the state. The men are portrayed as strong characters at the forefront of the painting whilst the women are portrayed as weeping for the impending loss they face. The sons go and fight and only one returns. The story is complex as one of his sisters is betrothed to a man from the Curatii tribe and she weeps for her loss. The brother kills her. The idea here is that one must be willing to sacrifice—even sacrifice one's life and family members—for the state.
This painting is held in The Louvre Paris, and is huge. I remember first seeing it up close and was amazed by the colours and the incredible detail. I had been so excited to see the ''Mona Lisa'' but this is the picture I fell in love with. Forget the Mona Lisa, look at the work in this one.

this depicts the murder of Marat, a publisher, who was David's friend and fellow revolutionary. Marat was murdered in his bath as depicted here by a woman named Charlotte Corday. Charlotte was an aristocrat who was trying to prevent what she saw as the murder of 100s by causing the death of 1 person. It is thought that David used Christian imagery in this painting to compare the death of Marat with that of Christ.
David was imprisoned at the fall of the Revolution and eventually exiled to Belgium in his later years. His impact on painting however was long lived as he had many pupils who I may discuss at a later date.

I hope you have enjoyed our second piece of art history.

Labels: but is it art?