So we are now onto month three of this series about artists and I am enjoying touching base with some of my favourite artists and their works again. Today I thought I would go with Monet.
If you're in the UK you might have been glued to the new series on Impressionist painters on Saturday nights on BBC2......For me it has been just like listening to my Study of Art teacher all over again.

Anyway onto Monet probably one of the most famous Impressionist painters and most recognised in the world. Even if you don't know who he is you will probably have seen his art.......................... 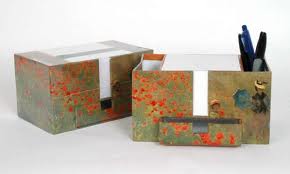 ............................we recognise them as by an artist, some may say Impressionist, some may say Monet but he is there in everday life for us to see.
Monet was raised  in the  seaside town of Le Havre the son of a grocer. As a young man he would paint outside what he saw on the beaches. He was nurtured by other artists in the town and eventually moved to Paris. After a period in the Army, Monet eventually entered the art training of Charles Gleyre whose other students included Renoir. It would be along with Renoir, Sisley and Bazille that the Impressionist school would come. Named from a painting of Monet's called ''Impression'' and the criticism of an art critic who termed the painting ''Impressionism'', these men would form a radical new movement of art. Artists would begin to paint outdoors in natural, use bolder colours, short, thick strokes of paint are used and paint laid side by side. The ability to travel with small easels and pre-made paints in tubes made it my easier for the artist to go wherever he wanted to paint.

Probably some of Monet's most famous images are his numerous (over 200) paintings of the waterlilies at his hime in Giverny. Some were orginally designed to be viewed in a circular display in a Parisian museum. The following image is taken from a recent exhibit of some the paintings together in New York. 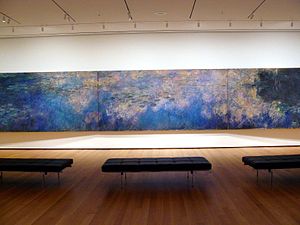 The following 2 images demonstrate his other works involving his key inspiration in his latter years. 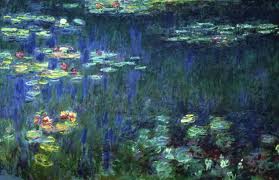 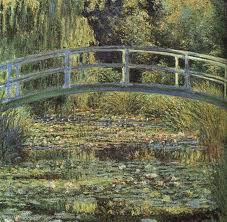 For me it is the waterlilies that mean Monet. They are such beautiful, vibrant pictures, each unique but also telling a story of how his garden and art developed. He must have loved both so much to paint them continuously at the end of his life.
One day I want to go to his garden's in Giverny to explore the ponds and waterlilies. The little bridge has had to be replaced as it rotted, but I can still imagine this wonderful artist standing there at his easel painting what he could see, probably with great difficulty towards the end of his life when he had cataracts. For someone who was inspired by the world he could see it must have been a tragedy for him to lose his eyesight. 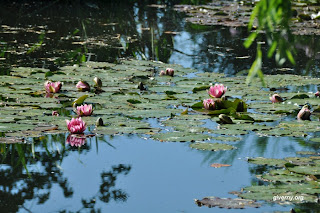 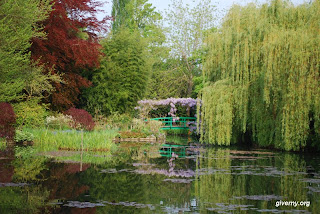 If you want to find out more about Monet and his life and garden, then go here for further information.

Hope you have enjoyed this months Artist.
Posted by JO SOWERBY at 09:00

Labels: but is it art?