What was I going to talk about today for Storytelling Sunday I wondered? To be honest I'm still not one hundred percent sure but I'm gonna ramble abit I think.

Now I am back at work, the usual thing has happened, despite my best efforts I have caught a cold. Boo hoo. It means I sound like a dalek and have the most awful taste in my mouth. Conversely it does mean I have stayed in my bed nice and warm and cosy this morning. I am joined by the fluffbuns namely Holly (fluffbun) and bayb fluff (Willow). We have always had animals in my family. My grandparents had dogs and we grew up playing with Sally who was a colly with a poorly paw and Tufty their cat.

Our own first pet was a black Burmese cat called Sooty, original huh? I can remember walking to my friend's house with my mum one dark evening to pick him up and we walked home with him in my mum's coat pocket. Sooty lived for about 15 years and was a well loved cat. We then had Smudge who was only a part of the family for a brief time and sadly was run over. My sister and I then had a succession of rabbits, guinea pig and another cat called Smokey who was a Maine Coone cat.

After I left home, I didnt have any pets until I bought my own house in Southampton and that is when I first got Holly and Lotty. hey were in a cage together at the PDSA a charity for abandoned pets. 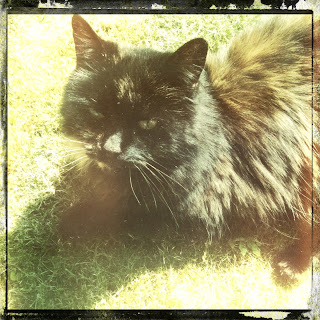 Holly was 3 months and Lotty 7 months. I couldnt bear to separate them so took them both home. I still have Holly obviously and inbetween I also gained a guinea pig and  a rabbit called Blackeyes who is over 10 years old and has been adopted by my friend and her children back in Southampton. Oh yes and there have been several fish!!!! Many from fairground wins. 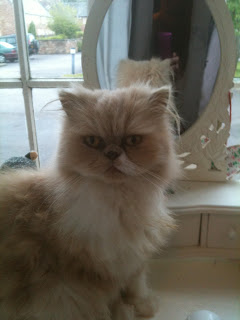 Willow came into the fold nearly four years ago. As you all know she is a pure pedigree Persian although I would never show her. She's too fussy and if I had to wash and brush her more than average it would be a disaster. She is more like a dog at times. She loves rolling in the dirt, she brings in dead things and her tail is more like a brush than a tail......................there have been forests of leaves in there! She is still beautiful though. As for Holly at 16 yearsish she can still hold her own, chases around the flat like a kitten at times and generally loves sitting on any lap available.

Having pets has made life fun, expensive at times but generally a very postive thing. So go get one, it's the best therapy ever and research proves it :)).