When I chose my word ''BE'' I was really happy as it had taken me a while to decide unlike other years when I had already got a word in mind. As many of you know I have a Pinterest account, who hasn't, and began collating my resources and ideas quite quickly. I have got a number of images and quotes but when I found this I was hooked straight away.

It was a link to the blog of Rachel Sower's ''Blog By hand''  where she creates beautiful things and has a passion for embroidery. She had chosen the word Give has her word to live by this year and had created a beautiful embroidery of her word.

So I decided to create one for my word. To begin you need to choose a font on your computer to write your word. I chose Castellar and sized it at 350 to get a reasonable design. Here is what it looks like on screen.......... 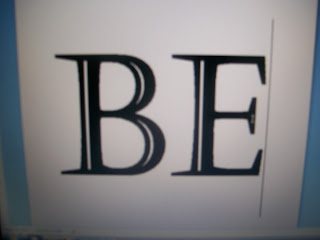 The next task is to choose soem fabric. I have a stash of embroidery stuff, yep I know more stash!!!!!!! I used a piece of linen in cream and found a range of different flosses and beads, which Rachel also used. I then traced the word onto tracing paper and transferred the image onto the linen old school style. You need to go over the image afterwards to ensure it is clear. Then you use black thread and backstitch around the image to make your frame. Mine looked like this.......... 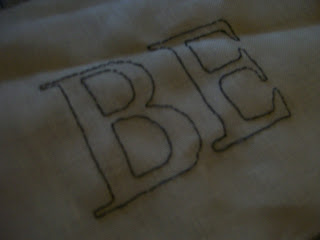 Once this part is complete, you are pretty much free to do whatever you like to make the word yours. I foun d some reflective beads in different sizes and chose these to accent the first letter with. These pictures show what the process looked like........... 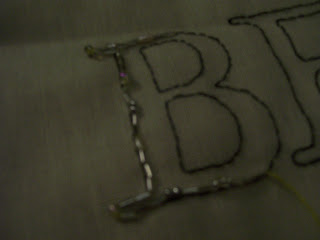 I didn't go with a plan just went for it, as Rachel suggested be organic, so I was. I will next choose some different colours and begin filling out the design with different images and stitches. I am primarily a cross stitcher but can also do chain stitch and French knots so will use those. I plan to put a heart shape in one of the B holes and also some flowers and a bumble bee of course. 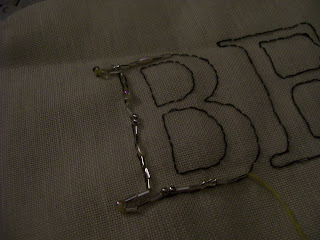 My other idea came from JimJams who had shown how to make a card using different languages and the words Thank-you. I hopped over to the design site called Taxedo and made a foot shape using the definition of ''Be'' I had found in the online dictionary. I chose a foot as it represents my footsteps and prints over the coming year. Here is the end result................. 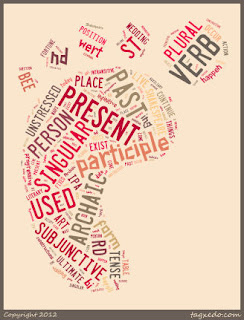 So have you done something a bit different for your word this year?