Hi everyone and a belated upload of the latest Glitter Girl adventure. This was partly due to the Bipolar and also cos I got stuck on my embellishments and couldn't decide where I was going with it all. Anyway, this weeks challenge was all about White space and how to use it effectively. Glitter girl's video includes an excellent tutorial on how and why we need to consider the use of white space in scrapbook design. Enjoy.


I already had my photographs in mind when I watched the video, they are ones from 2011 when my girlfriends and I went on a jaunt to London. As it was Christmas time, part of our trip involved walking around the West End looking at and admiring the Xmas lights. I had 3 pictures in mind which wanted to use as a main feature across the page but as the pictures were quite dark and because I wanted to write a fair bit of journalling, I was getting worried about how to fit everything in. So I had a brain wave and decided to put one of the pictures onto a hinged paper block and have this as an opening surprise. 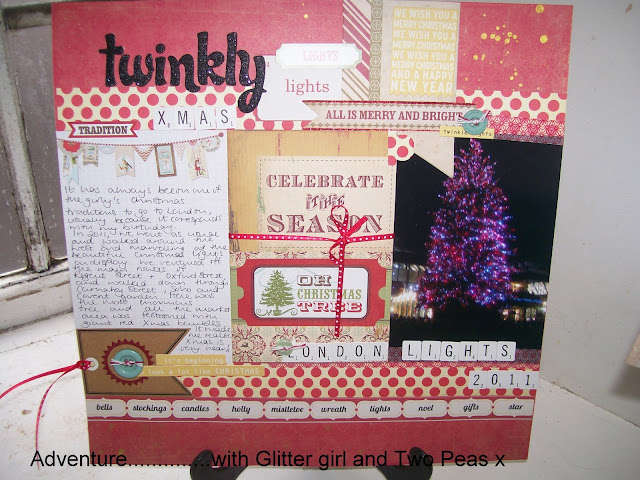 So above is the completed layout. I added some glimmer mist spritzing in gold at the top right and bottom left hand corners then simply added the photographs on top. I then used 2 inch wide strips of red and cream patterned paper and a strip of ticket paper underneath to ground the photographs. 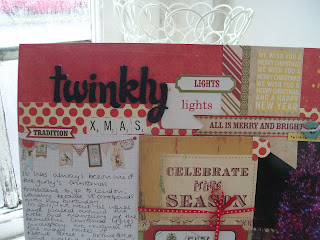 Here is a close up of the title and journalling spot with an embellishment too. he title black glittery letters are some I have used previously by Thickers and the small Scrabble style stickers are from the ''This and that'' paper range by Echo Park. In fact the majority of pieces are all from that range. I found some stickers with the words ''lights'' on to highlight what the story was all about and used three different elements of banners 2 as key embellishment spots and one one a sticker which said ''Tradition''. 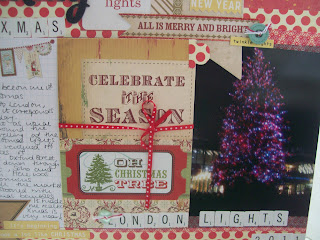 This is a close up of the photos and the middle section of the layout which is tidied together with a thin red dotted ribbon I bought in my local sewing shop. 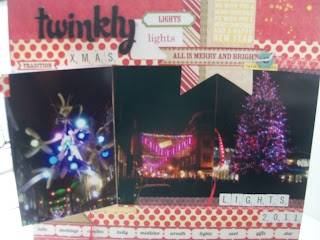 And this is what the opened flap hides, three pictures taken in Carnaby Street, Covent Garden and Soho.