So a few days ago I told you that I went to WI. For those of you perhaps not in the UK that is Women's Institute. I started going back in January before I got ill. Our Wells WI, is mixed ages but mainly 30 pluses I think and we generally meet in Wells Museum where we are occasionally joined by his eminence Louis the Cathedral cat.

The first month we learned all about creepy crawly bugs and large spiders and snakes. I even got my photo in the local paper holding said huge spider. Thankfully that was a one-off and the next month, although about little insects, was much less hands on. We had a bee expert come in and visit to talk about honey, bees and the environment. It was brilliant.

So this month's event was run by Suzanne who went to university to study fine art and printing. We learned all about the differences between a reproduction and a print. A reproduction is basically a photograph of an original picture/painting which can then be mass produced or given a limited run of prints. A print however is a piece which the artist has made either by etching, lithography, screen printing or lithograph, to name a few, and then printing these in a limited run and destroyed the original print making tool. It was fascinating what could be achieved.

So we all got to have a little go at producing a print of our own using a tiny square of polystyrine yes like your ceiling tiles only thinner. I decided I want to do a cup of tea. It was so simple, for this exercise all you needed to do was to draw your image into the tile firmly applying pressure but obviouly not enought to go right through and this is what I made: 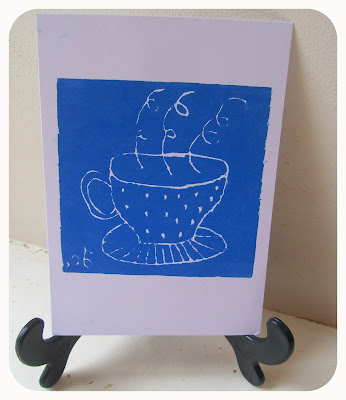 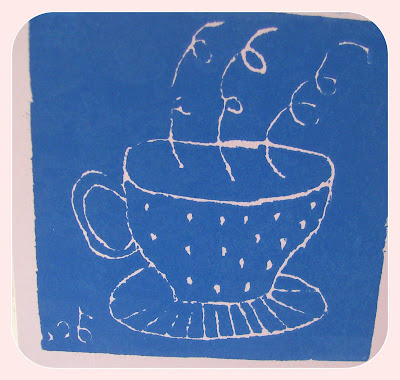 Did you spot the silly error? Yep, I forgot to write my name backwards on my tile so it came out backwards on the picture. Well, you live and learn.