Break It Down Week 1 x

Has anyone else been following Shimelle Laine's latest free class over at UK Scrappers? Well I have because a. Shimelle's classes are always full of great themes and ideas, and b. because it is a free one.

Each week begins with a discussion about a particular photograph to use usually with a theme. The first weeks was ''Then and now''. Over the next next 6 days Monday through Saturday Shimelle guides you through making a layout using your chosen photographs, identifying your colour themes and how to use them, adding embellishments and journalling. All the posts have the added advantage of having a downloadable pdf and often Shimelle has added in a supporting video or two.

So for this first weeks layout I chose 2 photographs of my friend Ben who is a Royal Marine and looked at the day I was invited with his family, longterm friends, to attend his Passing out Parade and then a photograph he took while out in Norway undertaking freezing cold activities.


I took my colour combinations from the photographs and especially from Ben's uniform and primarily used dark blues, yellows, golds and white. I found some wooden letters and painted these gold to use in the title and I also used some Studio Calico wood veneers: arrows and cameras which I also painted gold.

Because the bottom picture has several other Marines in it, I wanted to highlight Ben specifically and I found a sticker frame which I added and then placed arrows and ''Now'' next to Ben. The yellow thickers are his surname.

Forgive the terrible photo of me, but the embellishments here are highlighting the picture of Ben's Passing out Parade and this picture is the ''Then'' picture.............

This is a closer detail of the bottom Now picture illustrating the frame around Ben and the arrows and other embellishments I chose............... 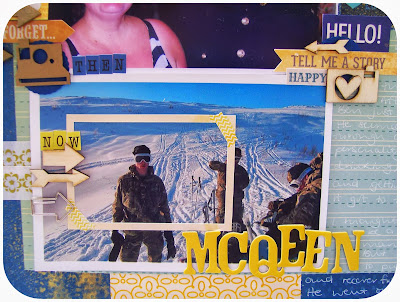 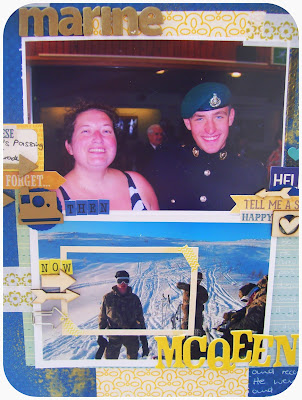 I used a white roller gel pen to write my journalling down the right hand side of the page. I won't write it all out here because it is personal but it describes my feelings at watching him pass out as a Marine and the struggles Ben has gone through to retain his Marine status. 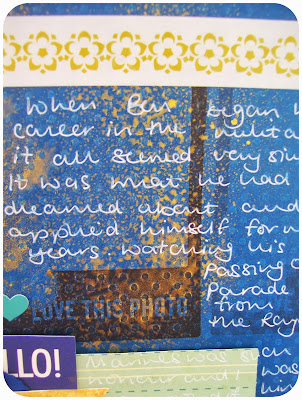 I hope you are all enjoying Shimelle's class as much as me.
Posted by JO SOWERBY at 16:34

Labels: Break it down, shimelle