My month in numbers ~ August x

Hello and welcome to another numerical roundup. This month, as last, Julie has asked us to take part in a communal count and here are the numbers we needed to recky up.......... 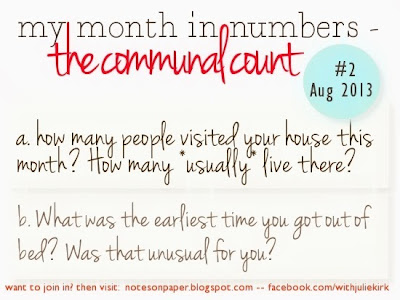 So in answer to question a. we had:

1 Community psychiatric nurse who came to visit me for the first time this month at home. Usually I go down to The Bridge which is our mental health community building but this time she decided to come do a home visit which was much lovlier.

1 Polly and 1 Flora my friend and her daughter who brought me birthday cake and some Sweet peas which smelled gorgeous.

Numerous flies and knats plus leaves brought in by the cat!!!!!


Question b. the earliest I got up was 7am, not because I wanted to but because the cat jumped on me. I know, she's amazing isn't she. That is not usual for me, well being jumed on by the cat can be but not the time. I am a later sleeper basically because I have very restless sleep and find it hard to get to sleep sometimes. Having said that often I don't get to sleep til 4am so 7am was quite good.

How many tablets am I taking? Well they initially went down by 1 but then went up by initially one then 2 as I was so sick. But now I've stopped those and am back on the same number plus 1 extra blood pressure tablet. Drug withdrawal is rotten, especially when it lasts 6 weeks.

1 appointment with a careers advisor

This month I rediscovered my Kindle app and downloaded lots of very cheap and free books to read and I read about 10 in total.

Where did I go? I was meant to go to Manchester with my friends to see The Feeling and Patrick Woolf at Pride however my sickness prevented me from attending, not a great weekend. I cried alot.

How many birthdays? There were several birthdays this month but 3 fell on the same day the 18th. My school friend Roz, my neighbour's daughter and my friend Luke who was 21 again apparently. Well we're all 21 again aren't we? Then my friend's son right at the end.

Also 1 wedding anniversary for my friend's Sarah and Graham.

How much scrapbooking did I do? None as I just felt way to ill. I have however got lots of plans.

And this month I amdoing Learn something new everyday for the 6th time, wow that's gone fast. How many of you will be joining me? And 30 Lists in Spetember.

Labels: my month in numbers