..........so todays blogpost is all the fault of Amy. If it hadn't been for her, then you might have been saved the nostalgia of children's television about to assault your senses.
So yesterday Amy blogged about her daughter's joy of watching a specific children's programme called Playschool. Playschool I hear you shout, yep Playschool is still alive and kicking (see what I did there) in Oz. Ok so the toys are different, but the underlying themes and ideas are the same, even down to the windows. So it got me thinking and researching into UK Playschool because I loved it as a child. Unfortunately it has led to the pure nostaliga of my fave childhood programmes, so be prepared for a magical ride into my younger days, as some of you are alot younger than me don't feel embarrassed for me if you have no memories of said programmes but sit back, make youreslves comfortable and enjoy the ride.
Firstly, the said Playschool was a fave in our house for me and lil sis and I think especially for my mum who would have at least 15 minutes of peace and quiet whilst we watched. Playschool was all about a house, with a door and windows and had 2 presenters who did amazing things like dancing, making and reading stories. They had toys, Hamble, Humpty, Big ted and Little ted and Jemima. 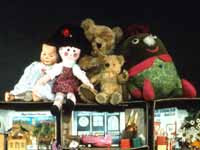 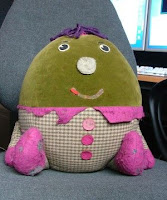 They had 3 windows square, round and arched and everyday you would go through one of them to a mystery world.........they were the precursor to Tubbyvision............There were animals as well called Kokkattoo, Bit and Bot the goldfish..........I loved it. But eventually it ended....can you believe it. However it is still running in Oz so yeah for that.
The programme on next was usually Jackanory and I REALLY loved that. Stories read over a week by a famous actor/celebrity and doing all the voices and actions. I remember Bernard Cribbins and Kenneth Williams, they had g8 voices for stories.
Then I found Youtube. Ah Youtube, there you can find anything. So I delved furhter into my childhood and found Fingerbobs......a mouse with an owner who had a g8 song and made things.
Theme of creativity coming through. Of course you have to include Blue Peter......more making. I made my own Pippa house for my dolls.
I also found the Woodentops, The Pogles, Andy Pandy, and By the River Bank..........the amazing antics of a hamster called hammy, a rat called Roderick and a guinea pig called GP. Lizzie's GP's could have there own programme!!!!
Then it all got rather silly. I found the theme music for The Banana Splits so I have been Lala lalalaing around the flat singing the theme.


A whole load of black and white French dubbed programmes we saw as children like White Horses and Belle and Sebastien.
The really sad thing was how gentle the majority of these programmes were. The programmes my friend's children watch are all spies, evil men taking over the world, and generally not as subtle as I remember. Is it just me or are children subjected to much more scarey stuff these days? OK I'm not going to get on a soapbox, just wondered.
Ok so I had Dr Who but even he wasn't that scarey really. That was our Saturday night family special. About 5pm we would all sit down in the family room, yes we had a family room, and Dad would watch the football results.

Mum would bring in a trolley, yep a hostess trolley was owned in our house, and laden with crumpets, toast, Fondant fancies, homemade cakes and jamtarts. My fave FF was the chocolate one yummy. Once we had eaten and watched Final score it was children's time. Basil Brush was on. Here he is, isn't he smart?

A foxy character of Sherlock Holmes style with a human called Mister ROy. They told silly stories and jokes and Basil boom boomed alot. After that it was Dr Who.........my sister always hid behind the sofa...........the first one I can actually remember was The Green death where you literally turned green. I also remember The Pyramids of Mars which featured some rather entertaining mummies whose method of murder involved squashing you to death between their manyl chests!!! It turns out my godmother's husband played the baddie in it...........gonna have to watch it again! Then it was time for all little girls to have bathtime and go to bed, hopefully with a story made by daddy about Drogg the dragon. Those were the days.
Happy memories everyone.