So it now officially Autumn, and wow does it feel autumnal today. I have just managed, by the skin of my teeth, to find the final 2 pictures for Rinda's scavenger hunt although is a little suspect. They would have gone up yesterday, but I spent the day out and then got home and collapsed in bed for 4 hours feeling very sick. I still have a weird headache but so much better than yesterday, I thought I was going to pass out! Yuck. 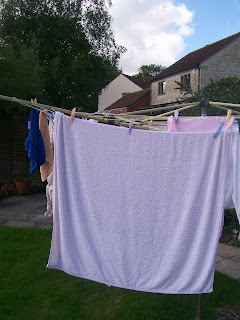 this is my mum's as we are not allowed to put our washing on a line here. Something about the aesthetics of living in a Victorian hospital and the neighbours complaining vociferously. I had to find a tricky angle as the mother's nightwear would have been recorded for posterity and she did not want the blogosphere to see here winciet nightie, heeheee.

Secondly, I needed a swing or hammock hanging from a tree. Now this is where we go slightly arry. I couldn't find these things anywhere. Maybe I live in the posh part of town or something but no-one had the picture I needed so instead I offer my mum's swing seat. Not hanging from a tree, not a swing as such nor a hammock but nevertheless my one chance at completing the hunt to my own satisfaction. At least give me props for trying. 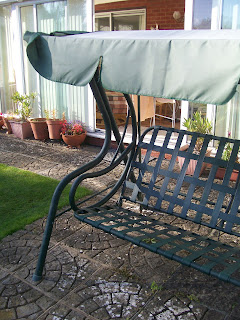 So another year of hunting is over. I have really had fun finding my pictures and trying to think outside the box on some of them. I don't necessarily have a favourite photo but a funny story. All the pictures I took of Burnham Pier and the shadows, were taken on a disposable camera because after all my traipsing miles out my way to find a pier my camera battery died. I then had to hunt around town to find a camera I could use and get the negatives onto a CD too so that I could upload them for your enjoyment. I think I should get extra points just for determination. Anyway here's to 2013, another hunt and more fun.