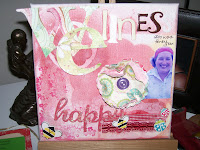 Yesterday I mentioned something I had been working on for the Ali Edward's word of the year idea. It is rather than making New Years resolutions, instead you focus on one word which will underpin and infl;uence your year. Well I chose the owrd Wellness, partly because I am doing a Wellness class at Big Picture Scrapbooking which my sister gave me for Xmas and also because I want to be well holistically this year. I have said before I suffer from Bipolar and it can have a detrimental effect on many areas of my life. Well so far it's lost me my career and recently my job so I'm getting to the point where I feel sometimes it rules my life rather than me being in control.
Anyway, I had a small canvas about 6 x 6 inches and just started throwing things at it at the weekend. I found a picture of me when I was really happy at a concert in Hyde Park a few years ago. I painted it and sprayed it with glimmer mists. I stamped it with some flowers and found some mismatched letters I liked and a chipboard word saying happy. I like the way it's turned out. The only thing missing was something in the middle. Well I found a flower tutorial on Youtube yesterday and made one blow me if loads of people haven't been making them!!!. It's called a poofy flower by Dawn McVey if you're looking. 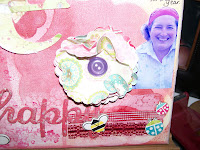 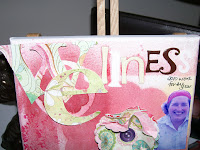 Today I have been studying allegedly for my interview. I have been reading Dept. Of Health documents which are boring and not well written either all afternoon just in case they ask me something about them. I have also been getting my portfolio of evidence ready in a folder. I decided to put in some of my LOs and a print out of some of my blogposts as outside interests cos no-one else seems to know what I'm rabbiting on about otherwise. Also it makes it abit more interesting than just courses you've been on and reflective practise, don't you think?