Today has been revision Wednesday again as I have another interview tomorrow morning. This time it's for a Community health nurse job which would be working within the health visiting team, and I used to be a health visitor so I have the qualifications, it all depends on their reactions to my health record and my bipolar as always. So I have been reading as much stuff about that as my brain could manage. Then I did some more scrapbooking. I have to admit I'm really enjoying doing it as I usually sit in forny of the tv and I feel I am achieving something instead.
The first layout is of a big holiday I went on to Australia. One of the places I wanted to go was Uluru, or Ayers Rock. It is an amazingly sacred place to the Aboriginal society so they request that you don't climb on it, which I didn't. Instead I walked around the base at dawn which was increadible not only because you realise how huge it is and also the cave paintings and formations of rock you see. 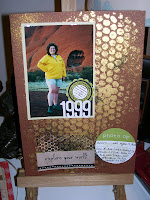 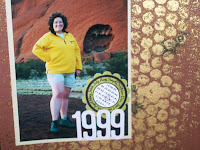 I painted some bubble plastic and stamped it onto the cardstock to symbolise the style of aboriginal painting which is very pointalistic, ie made up of lots of dots. This style is different though in that the dots are large rather than truly pointalistic which you see in French painters work. It's for Shimmelle's minibook.

The second LO is of some flora I saw in Portugal when I went to stay with my aunt and uncle. The coastline where they live, which is further along from the Algarve itself is amazing. Lots of little coves and crashing waves. So I did a LO of flowers and glimmer mists. I used some chipboard shapes as maskes for clouds and flowers then handcut some flowers. 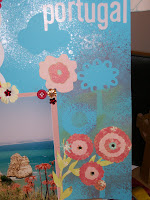 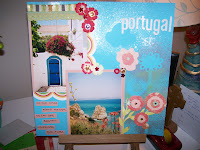 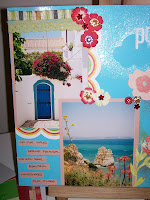 I'm really pleased with how they've turned out. Anyway off to have some tea and maybe some more reading!!!!!!