Today , for a change, Miss Abi and I decided we would do a swap and guest post on each other's blogs. Abi is a fabulous scrapbooker and we met over the blogosphere doing Shimelle's blogging class. She is still at school but about to move onto University in the next 9 months, so doesnt get as much time to craft as she would like. She is a beautiful young woman..................

1. I am terrified of Moths
2. I get so excited about christmas that last year I woke up at 5am on christmas morning!
3. I met the Queen when I was five but was too scared to speak to her! She did like my hat though!
4. I want to be teacher
5. My favourite christmas carol is "Shephards Pipe carol" by John Rutter!

Hi, It's lovely to be in a different place!

Today I'm guest posting from the lovely Jo's blog! If you don't know me, i'm Abi, I'm 18 years old and an avid crafter. Please stop along at some point and say hi at my blog where Jo is posting!

So..today I wanted to share a little bit of crafting love and share how to make this.. 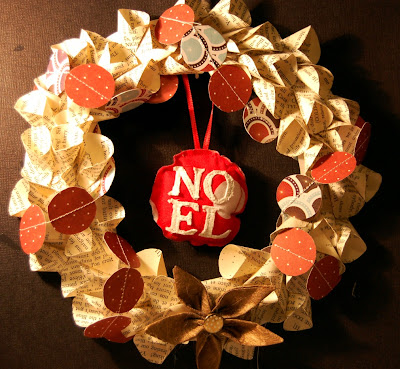 I got a lot of ideas from different sites and used them to create one design. The first step to making the wreath is to make the base.

1. I'm afraid in this tutorial you are going to get very bored of cutting out circles. The little trumpet like shapes around the wreath are made from circles cut from an old book. It doesn't matter what paper you use. It just has to be double sided. I used a jam jar lid as my template and cut out lots of these circles! Then take one side wrap it round to create a mini funnel and stick with a blob of P.VA. Simple as that.
2. After you have made lots of these find a nice piece of cardstock or cardboard. I used a small plate as a template and drew round it . I then drew another circle about 3 inches inside the big one. Cut this out so you have a wreath shape as your base.

3. Stick the little trumpet funnels on the cardstock base. You will need pretty strong glue for this. The best effect I think is to stick the funnels in a circular pattern as you can see from the pictures. Very simple. Don't be afraid to layer them up, place them in each other or slightly under each other. You are trying to create as much texture as possible.

The inspiration for this was taken from this site.

4. You now have the basis for your wreath.

5. The next step is to make the golden flower at the bottom. Again cut out five circles from a double sided material. I drew around a selloptape ring to get my template! It is best here if you use thin paper, tissue paper or material.


6. fold the circle in half, half again and half once more. till you have a triangle. Now sew the bottom (the open end) in long running stiches. Pull the cotton taught until  the end gathers and sew in place. You now have one petal. repeat on all five circles until you have five petals. Attach together either with glue or by sewing then add a brad through the middle. 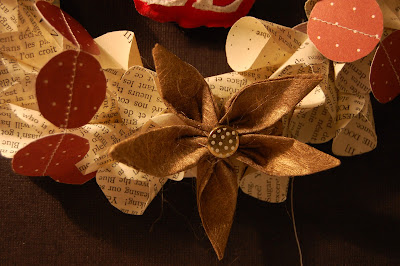 You will proabably have noticed the paper chain around the wreath. My tutorial for this can be found here.
Make it as long as you like, I used about 30 circles and whatever size circles you like. Wrap it around the wreath and secure at the back with glue. Then attach the flower at the bottom of the wreath. 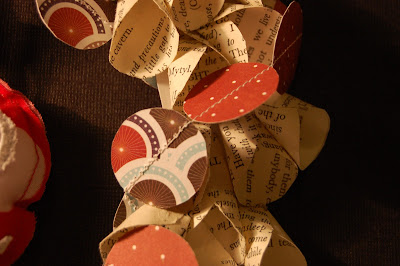 Finally to create the cloth bauble hanging in the middle I followed a tutorial on this site. The wreath looks lovely without it though so it can just be an added extra! 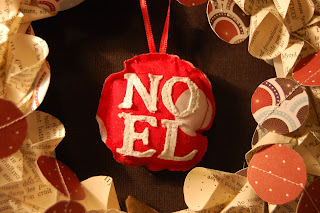 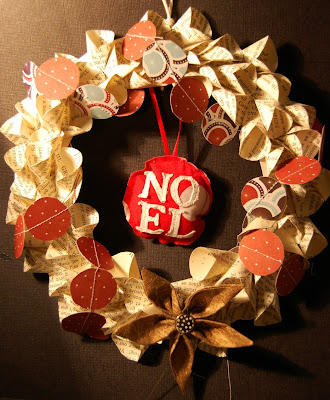 And voila! A simple christmas wreath that looks lovely hanging on a door!

Thanks for stopping by