If you know me well you will know that tonight at 6pm I will be glued to BBC1 for the start of the new series of Dr Who..................yey for Matt Smith's Dr. Somewhere in my parent's stash of photographs of my birthdays there is a fabulous picture of me and my little friends looked terrified at the TV screen while watching an episode of Dr Who when we were about 5 or 6 years old. I remember Jon Pertwee, Tom Baker as my favourite ''older'' doctors but it is Chris Eccleston, David Tennant and Matt Smith who have brought the Dr back to life with avengence in my older years. 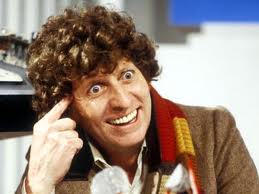 BUt there is one other person who has been central to Dr Who from my earliest memories and she is Miss Sarah Jane Smith. It was always fun when she was on board the Tardis, one of my fave episodes was ''The Pyramids of Mars'' as a child, murderous mummies roaming around the countryside squashing people to death. Little did I know the big bad was being played by my godmother's husband to be, he also played the big devil creature with David Tennant   ( his voice anyway and Gabriel is very scarey for a nice guy)

. Sadly this week Elizabeth Sladen died from cancer so it will be rather a bittersweet return for the Dr. Luckily the BBC in their wisdom are showing a short tribute on CBBC after the new episode of Dr Who and I will be recording it to watch later. One of her greatest episodes was when she came back to see the Dr when David T and Billie Piper were together and trying to destroy aliens in a school. Just seeing her again and the return of K-9 was such a brilliant storyline. She later returned again to save the world with the Dr and the extended gang when Catherine Tate was his latest companion and they destroyed the Daleks. 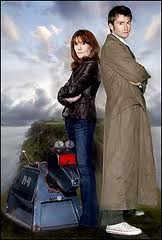 One of the reasons I love the Dr is the brilliant story telling and this has been so brilliant since Russell T Davies and Steven Moffett took over. There has been some incredible acting talent to watch, cant wait to find out more about Dr River Song, the incredible Alex Kingston, and her role in the Dr's life. Is she his wife or not? Will the writer's ever reveal the truth? Who knows,  that's what keeps us all enthralled, that and the alien creatures the Dr encounters, the good and bad, new and old. I for one can't wait to see what happens this season, can you?
Just for a laugh can you reveal your fave Dr Who and fave alien (good or bad). 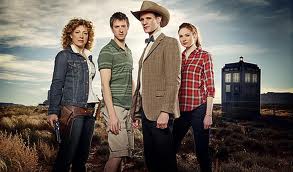 My favourite, well obviously Mr David of Tennant, but I am making Matt Smith a close second cos he's so mad and cute! And favealien well obviously as blog owner I cant choose one so I am being greedy and saying the Daleks for on going malevelance and super scarey fun and John Simm's Master for brilliant psychotic acting. Now it's your turn. 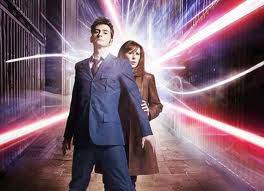