Hello everyone, thank you all so much for hopping by yesterday and joining us in our bloghop. Amy is so pleased with how it went that she is already planning another one next month...............more details to follow. The hop certainly has improved my mojo and I finished Luke's minibook, remember this post? Please check it out to read about the background for the minibook.

Anyway, I have not done any scrapbooking for ages and to finally want to do some was brilliant. I have had 3 days of not crying once which is pretty gr8 so I was pleased to finally complete this book. I enjoyed doing something really different, using up alot of supplies and also repurposing things too.

So here are the pictures of the rest of the pages, some are repeated as they have had extra bits added and I will let you know what I did as we go along. 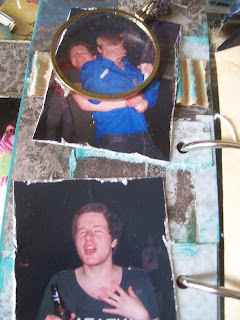 This is the page which had been collaged and was empty of photos, I added these 2 pictures which is had scuffed up to make them less ''pretty'', then I added the monocle to highlight the image of Luke and his then partner. 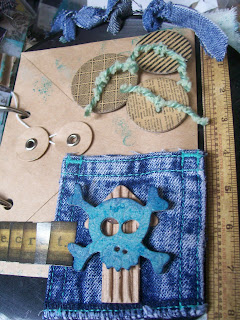 The wording on this picture says ''secret'' as the envelop hides a personal picture no-one else needs to see. The denim is a pocket from the jeans and the pirate skull is from Tim Holtz grungeboard. 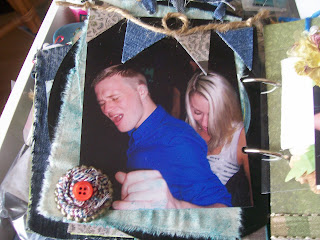 I added some bunting made from jeans and spare paper to this page and the flower is made from some material I had which is made using the twisted technique and applied to a bottle top and a button to finish off. 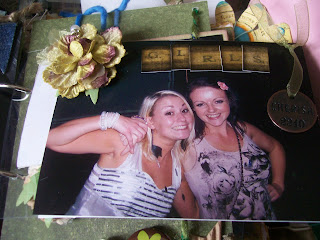 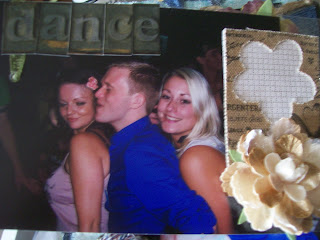 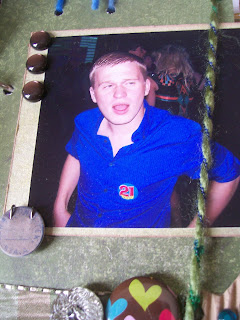 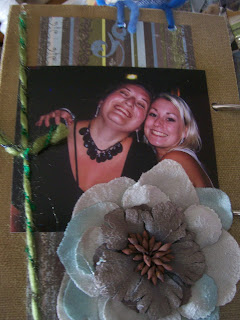 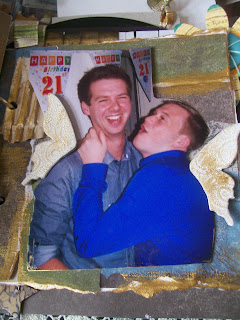 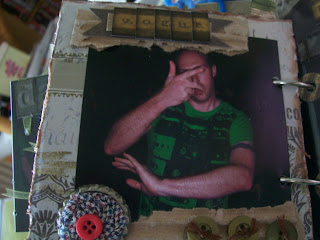 This page has cardboard packaging top and bottom which is an element used throughout the book. More flowers on bottle tops and buttons and the wording says ''Vogue'' which is what Tref looks like he's doing. 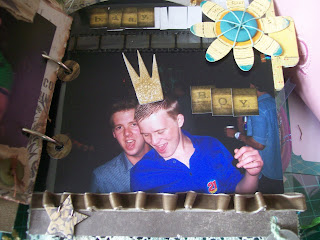 Another double-sided acetate page. This page has added ribbon and a gilt crown made in the same way as the wings described earlier. The title is ''B.day boy'' and all b.day boys deserve a flashy hat don't they? 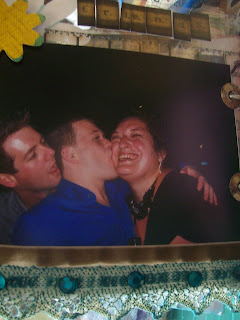 This page is called ''Friends'' and is simple but I coloured the lace with an inked pad and added some bling. The ring supports are by Tim Holtz as is the film tape at the top. 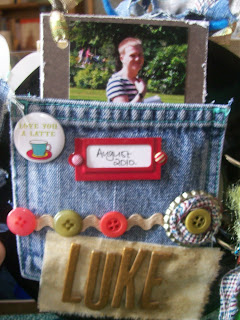 The back of the book is made using a large jeans pocket. I made a tag from chipboard and added a picture of Luke the day after when we went to the park. I added a date some ricrac and buttons another flower and finally some coloured chipboard letters on canvas coloured with distress inks. 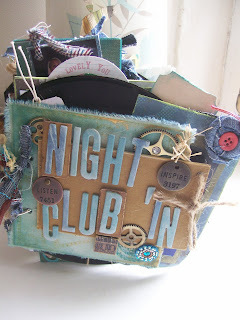 Here are 2 pictures of the complete book which I really love. Luke thinks he's getting it, shame that cos I'm keeping it for myself I'm afraid. 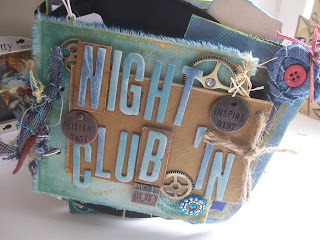 Don't forget to leave a comment on yesterday's bloghop post for a chance to win a Shimelle class free. It's open until tomorrow night and I will draw a winner Tuesday.