So last weekend, I took part in the bloghop for Jennifer Grace's Onwards and Upwards weekend and then spent a fun time scrapbooking and learning loads of fun things.

The first challenge layout I completed was for the Recipe challenge. In this challenge we had to make a layout or card suing the following products:


1 small square photo (you can crop down a larger photo) or square element
Something shiny or sparkly
Some encouraging / uplifting / happy words
At least one sticker (alphas don’t count for this)
At least 3 stars
Some yellow!
One stamp. 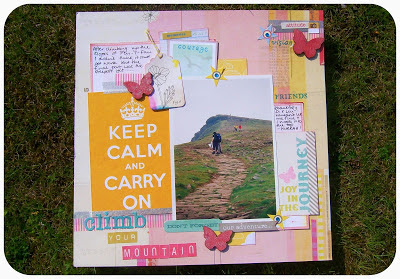 I actually chose a large picture of my view whilst climbing Pen-y-Fan in the Brecon Beacons but I did include a small square elements in the top of some birds flying across an Amy Tangerine cut up sheet.

For my shiny/sparkly element I first coloured the butterfliues and then painted them with glimmer glam which a glitter paint/glue. I found a quote in a stack of postcards I had bought for Project life and as it was yellow as well it covered two more list items. I used a number of little phrase stickers on the layout and also found a stamp with encouraging words like ''courage'', ''vision'' which I also added in.
I also added in three Jenni Bowlin stars which look like medals of achievement. 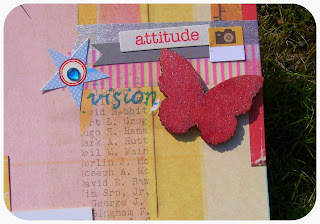