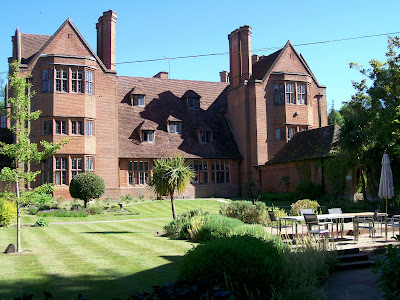 This weekend I went on my much anticipated Scrapbooking retreat which I had been given as my Xmas/Birthday pressie last year. Not only was it an excuse to scrapbook with friends and fab teachers but also to catch up with my old friends in Southampton. Before moving to Somerset in 2008 I had lived in Southampton for 15 years so I really wanted to see my two girlfriends and their families. I stayed with Kathy and co on Thursday and Teresa and co Friday and Saturday. Plenty of time to catch up, get invited to a Royal Marine's Passing Out Parade and read How to speak Dragonese to Jonny!!!!!!
Anyway the retreat was held at New Place, photo above, which is a De Vere Hotel near Bishop's Waltham. It was a beautiful place but VERY hot. The air conditioning was not enough for lots of exciteable scrapbookers!!!!!!
Anyway there were 6 teachers, 3 per day, and on the first day we had Cleo Jarvis, Shimelle and Ifa Zainon, all of whom are well-known to Scrapbooking magazine readers and bloggers alike. I know Cleo personally as she, until recently, ran Bellaboo and she lives in Bristol.
So having booked in and been given a fab goodie bag we all sat down for the first class of the day which was Cleo's. 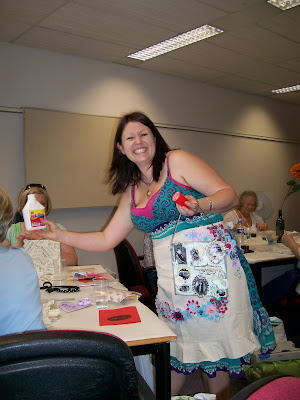 Here she is in her fab apron, all the teachers had made them while we had chipboard pieces to alter. She is holding the completed item we were making, which was very Cleo. We began with a plain square canvas and a bag with papers and embellishments. Firstly we had to crumple up a piece of vintage sheet music and then rip it up into small pieces. Next job was to make papier mache, by putting loads of glue onto our canvas and jigsawing and overlapping our pieces of music paper. We then left it to dry, which in the heat took very little time. While we were waiting we needed to cut out several frames from our paper and some other elements. The papers were by Webster's pages range called Your life. Beautiful. One has fromaes of varying colours and sizes and the other is quotes, frames, birdcages. Very vintage and cute.
By this time our fingers were numb from intricate cutting and the canvas was dry. We then dry brushed a small amount of white acrylic paint over the canvas and then inked it using distress inks using sequin waste and stamps, if u had them. 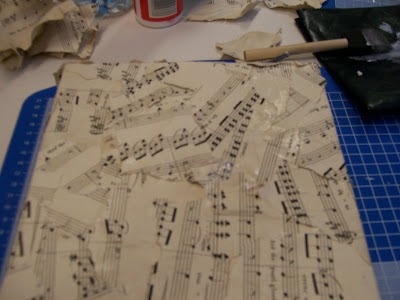 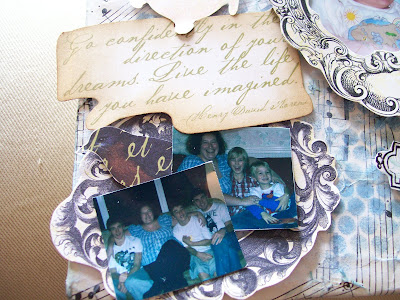 In the picture above you can see some of the distressing, I used Broken china. Then we added our photos onto the frames with 3D foam and began forming our wall hanging. 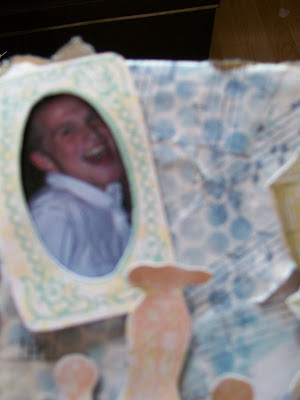 All that's left to do is add some flowers from my pack and the ribbon which is pinned on using drawing pins on either side. All in all I really loved this class as it uses different techniques and makes a mess!!!!
After lunch we then had our class with Shimelle. This was a minibook class. I will post this in my second post. Catch you later