Today I'd like to tell you the story of how history and family come together as one. As many of you may have seen on the news this week, it is the 75th anniversary of the rescue of British and French soldiers from Dunkirk when Germany invaded France in 1940. This rescue mission involved not only the Navy but many hundreds of local Kent boat owners who risked their lives to go across The Channel to rescue those soldiers they could. The story of "the little boats" is famous in this country. Between May 26 and June 4 1940, 338,000 troops were evacuated under Operation Dynamo. This effort also led to Winston Churchill's famous speech given to Parliament on June 4, 1940.........................

This was a very long speech and can be read in full here.

This has a very personal link for me and my family as my dad's father, Jack Sowerby was critically wounded and rescued from there on 31 May 1940. My grandad was an amazing man and I thought I would share a little bit of his story as a memorial to not only his experiences but those of the thousands of men who were injured, killed or captured as POWs at that time.

My grandad was born in Co Durham and he joined the Coldstream Guards in 1932 aged 18 years old. I am very lucky to have copies of his attestation papers in my family history files. These are papers signed when a new soldier signs up and follow him through his career. He was given these by the Coldstream Guards many years ago when my dad arranged a surprise visit for him to their barracks in Chelsea. 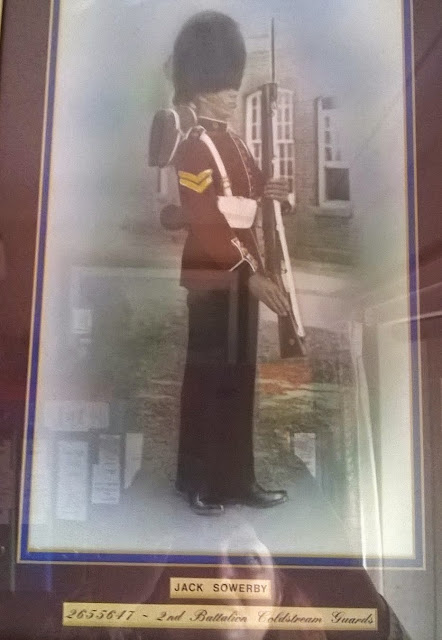 This picture is my grandad in his full Coldstream Guards uniform. It's not a great shot as it is a frame so reflects I'm afraid.

My grandad served with the Coldstream Guards, met my grandma and had my dad Gary in 1938. He remained in the Guards and was sent to France in 1939 as the German army began trying to invade other European countries. My grandad was in the 2nd battalion Coldstream Guards for all of his career. 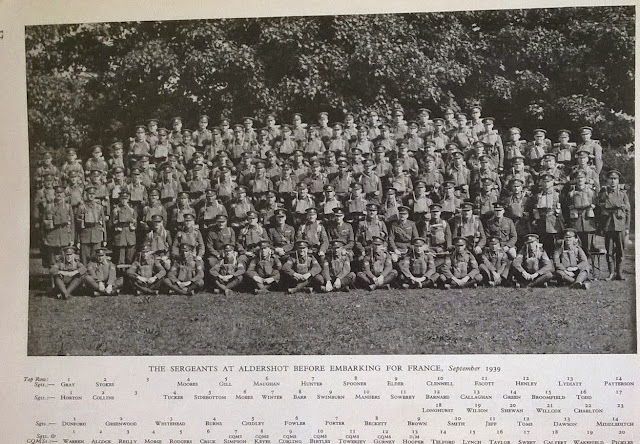 This is a picture from a book my dad owns of all the Sergeants, including grandad, before leaving Aldershot 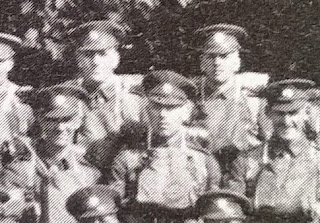 My grandad is the middle man in the row of three.

From his attestation papers, he was sent with his platoon to France in September 1939 and they eventually found themselves in a small town called Bachy, which is not far from Lille. 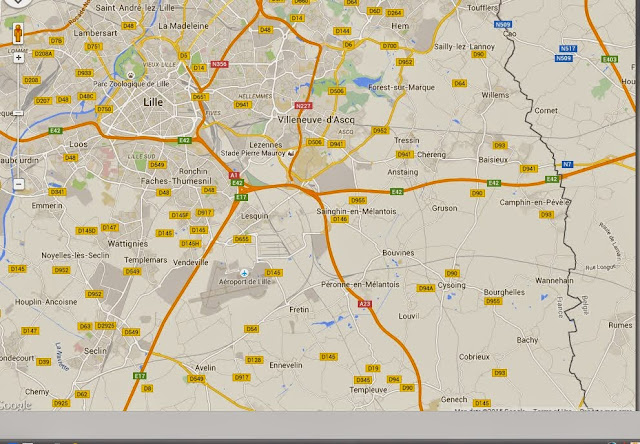 My parents has visited the town before and there is a painting inside the station of a Coldstream Guard in full regalia. My dad spoke to a French gentleman who said that the townspeople are forever grateful for the protection the Guards provided them. 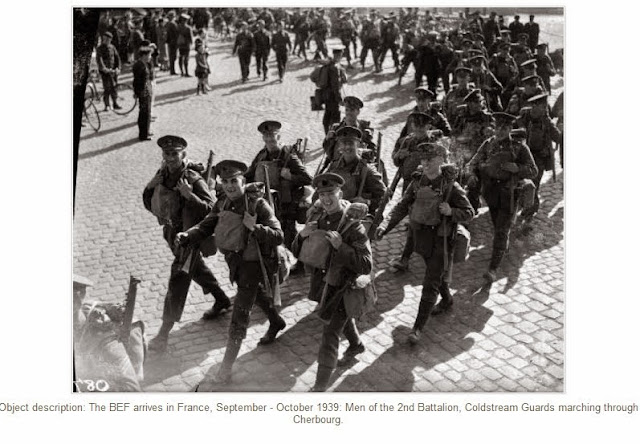 As the invading forces moved onwards, the Guards became embroiled in many skirmishes and many were killed or injured. My grandad once told us the story of how his commanding officer requested that he transfer his break in the UK and grandad came home early. On his return to France, he found that his commanding officer and platoon had all been killed in a skirmish which my grandad would also have been involved in if he'd not altered his leave. My grandad always said that he save his life by asking him to go home early.

In my research for this post, I found some fascinating details in the 2nd battalion's war diaries. Most of them have been destroyed but there are some parts which have been transcribed on a website dedicated to WW2. These diaries enable you to get a clearer picture of the experiences my grandad would have had during his time in France. 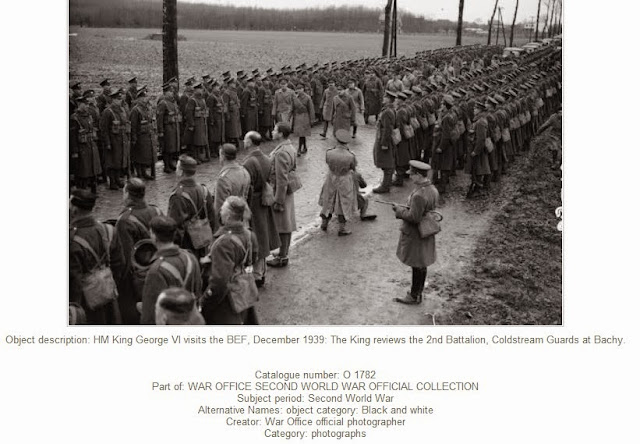 The main parts that I read described the days after the Germans invaded France and the soldiers had to move back towards the coast as the German forces moved upwards trying to cut them off. The nearest place to get to was the beaches around Dunkirk. The war diaries clearly describe the mass evacuation not only of the soldiers but also of the French people trying to escape through the roads, and you get a real sense of fear as many of these roads made the evacuating people open to the German planes who shot at and killed and injured many evacuees. Often the roads became blocked by destroyed vehicles and dead bodies. It must have been horrific.

Eventually, the 2nd battalion ended up in a place called La Basse Canal where they attempted to hold the Germans back thus enabling the other British and German soldiers to be evacuated from Dunkirk. As I read these diary pages, I came across this section from May 31, 1940................ 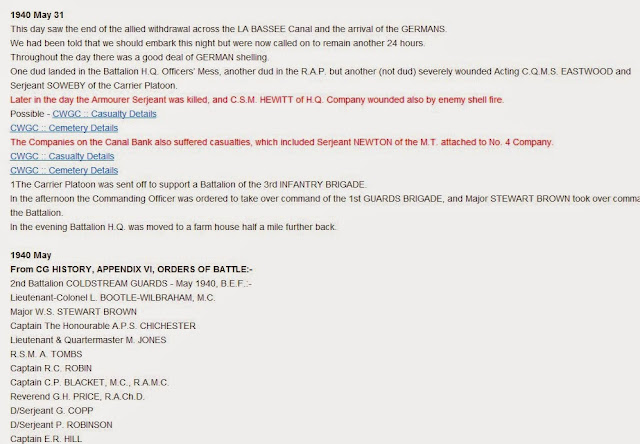 This shocked and surprised me, as so many soldiers were injured it seemed incredible that my grandad's name, Sergeant Sowerby was mentioned. However, it must be remembered that there could have been another Sowerby injured in the same way and at the same time. I would love to think that it was my grandad but we will never know for sure. My grandad was injured on 31 May and was in Carrier Troop though so it could be him..

My grandad was so badly injured, he had a fractured skull, shrapnel injuries and bullet wounds to the skull as well. These are documented in his attestation papers. We are not sure which boats brought him back to Dover Castle, however he was very lucky to come home and receive the specialist care he needed as many soldiers and sailors died in the boats before they even began to return across The Channel. Many soldiers were killed on the beaches themselves as they were easy targets for the planes.

After returning to England, my grandad spent many months recovering in hospital in Hillingdon and Mill Hill initially for 4 months and then for a further 3 months in 1941.  He was also sent to Roehampton for aftercare. My grandad said he remembers waking up and seeing my grandma and my dad who was a toddler at the end of his bed. My grandad was eventually discharged from the Coldstream Guards in 1941 for medical reasons and because he had what they called "neurosis". I am sure that these days we would call that Post-traumatic stress disorder.

On his papers, his commanding officer wrote:

" Military conduct - Exemplary, A steady, smart, hardworking and intelligent NCO who has done (unclear writing) throughout his period of mobilisation.............. Disability - multiple gunshot wounds to the head"

As a young girl, I remember my grandad had little hair and he had what he called "his dimples" which I would put my fingers into and laugh little knowing that these were in fact the scars of his wounds. He suffered from debilitating headaches for the rest of his life but considering he was only given 10 years to live after Dunkirk, he managed to survive until 1994 when he sadly died as a result of an aortic aneurysm in his abdomen.

In my family, we are very proud of his achievements in the Guards and so was he. He was a member of the Dunkirk Veterans Association and travelled back to Dunkirk for the 40th anniversary of those events in 1985. This is his certificate................ 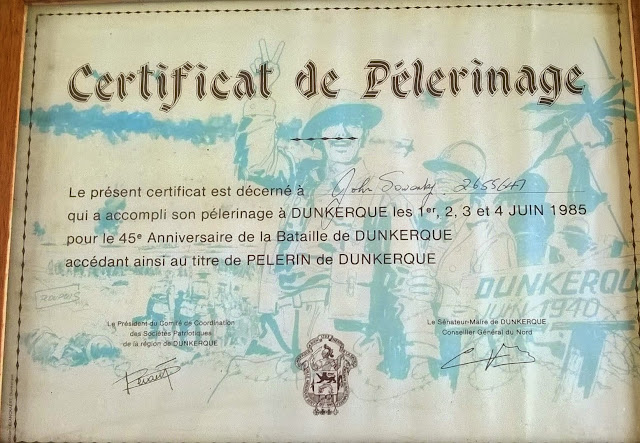 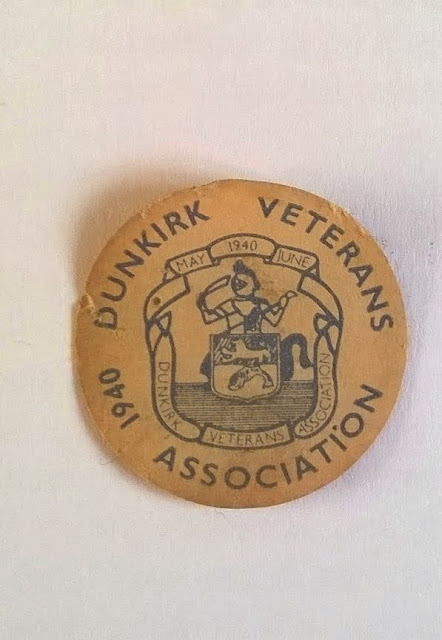 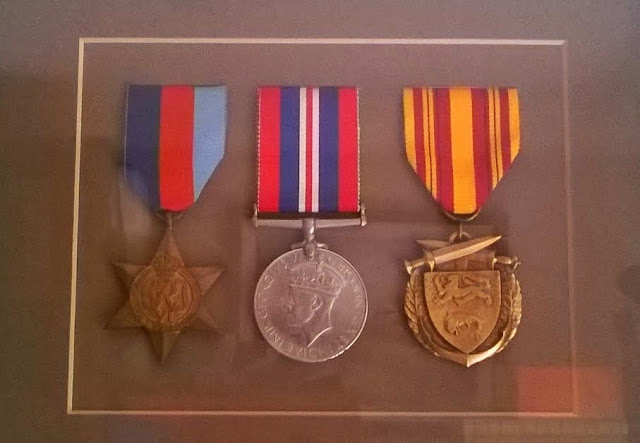 As so many of the soldiers who fought for our freedom are now no longer with us due to age and infirmity, I am so very glad to be able to continue to tell some of my grandad's story so that he, and his comrades, will not be forgotten. 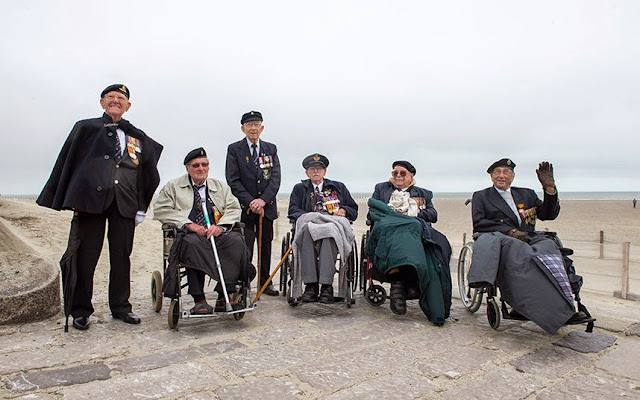 Some of the 2015 veterans in Dunkirk, they are all in their 90s, from The Telegraph 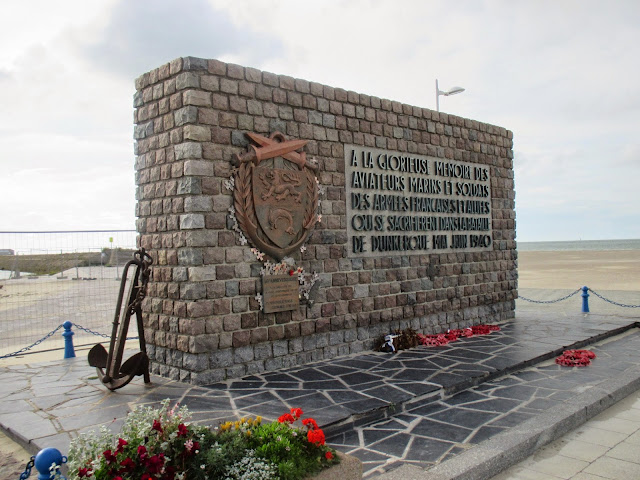