the publication of Jay's 10th book. 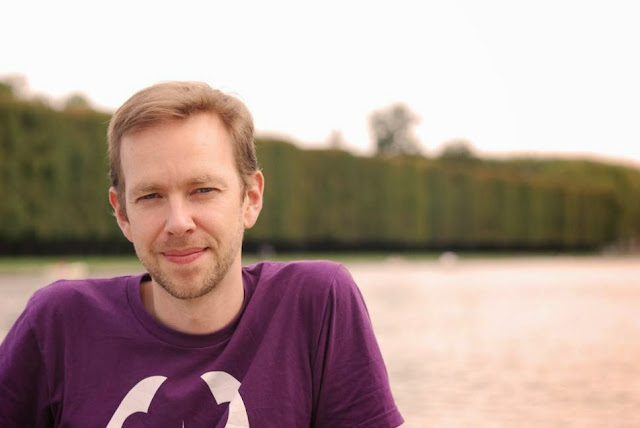 Jay is an American writer living and working in Germany, where his husband Andreas was born. Jay writes the books and Andreas designs and draws all the illustrations for Jay's books. A husband and husband team of incredible creativity. 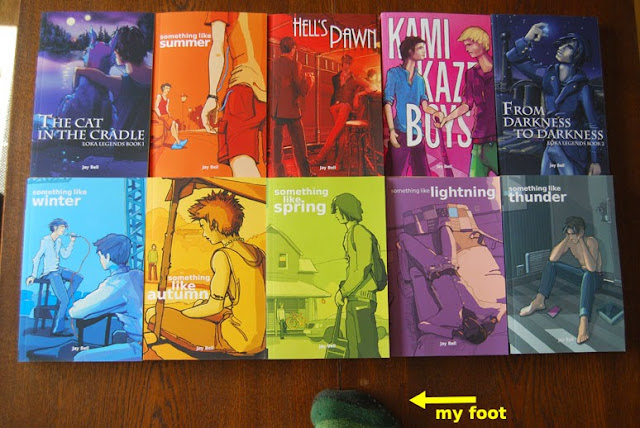 This series follows the story of Ben and Tim, two high school students who following an accident become friends and then......................... well you'll have to read the stories now won't you.

I have read all Jay's books, except obviously this new one, although I could have, more on that later. What I love about the books Jay writes is his brilliant characterisation, the engaging stories of a wide variety of characters from all walks of life, romance, life and hope. I always come away feeling real hope when I've read one of Jay's books. The other brilliant concept is that certainly with Summer and Winter the stories are told from different points of view. Summer is primarily Ben's and Winter is Tim's. This provides such a wonderful insight into the parts of the books which were missing, it gives a breadth to the characters and introduces you to even more.

Autumn and Winter introduce new characters but with Ben and Tim well and truly interacting with them, whilst Thunder and Lightning give newer or smaller characters a chance to shine.

So onto  why I could have already read the latest book, Something Like Thunder.

Are you sitting comfortably? Well so was I last Friday afternoon, when there was a thud on my doorstep. Thinking it was a new telephone book, I left whatever it was for a while and about an hour later went to pick it up (sorry Jay).

To my surprise there was a padded envelope with lovely stamps on it.

"What did I order that I forgot about?"

On examination, it was from Jay. "What is he sending me?" I wonder (Jay and I have corresponded for a while via email, Facebook etc).

Opening the parcel, out comes a copy of "Something like Thunder" to which I say another "What?" and 2 pieces of A4 paper.

On said paper pieces are three emails we had shared back in August and September 2013 to which I give another "What?"

Hi Jo!
Surprise! Remember this email exchange? I hope you like the end result. Please keep the details secret until the book has been out for a while. We don't to spoil it for anyone!
Thanks much for everything!
J 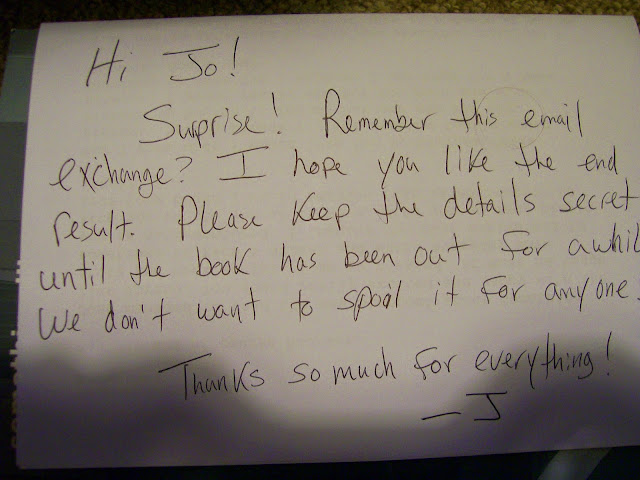 To wit another "What?"

So I re-read the emails and go "Oh yeah, we had a conversation about a plot point and I told Jay about an idea I had". Thinking no more I open the book to have a sneak and come to the Acknowledgements page and see this............. 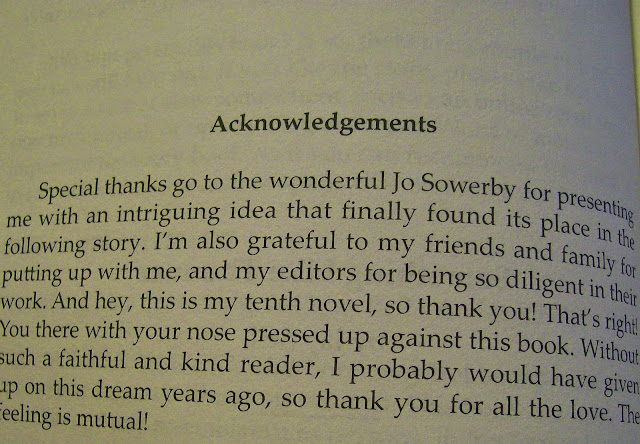 To which, I have a few freaking out moments using certain language not necessarily heard from this lady's lips. Have another look, freak out a bit more then laugh and wander around in a daze with a stupid grin on my face before sending a gushing fangirl email to Jay. 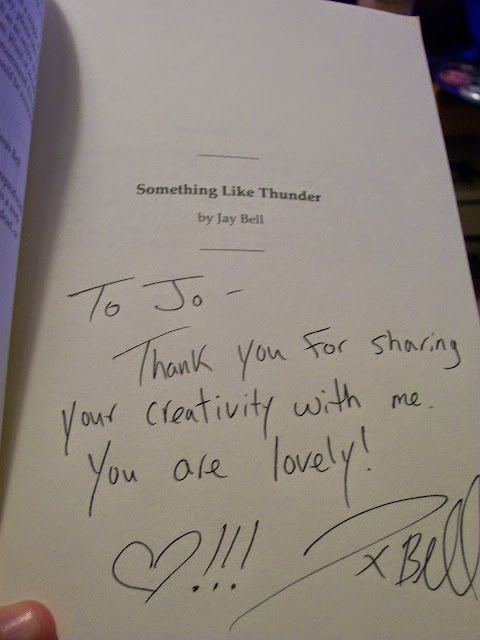 And Jay, being the lovely gentleman he is didn't run for the German mountains with Andreas but sent me the loveliest reply telling me he'd planned it all as a surprise and how my idea had just happened to work for this novel.

I've only told a few people, mainly mum and dad. This led to a hilarious exchange on Saturday.

Me: So what do you think?

The Mother: So your names in this book?

The Mother: So is it only in your book then?

Me: No, it will be in all the copies of the book people buy across the world.

The Mother: so it's quite a big thing then really?

The Mother: Well isn't that nice.

Yes, actually it is Mum lol.

Now as a hater of spoilers, I know not to tell you guys what my idea was or how Jay made it come to life. Indeed, not even I'm sure quite how it's going to roll out because my copy is now virgin territory. It is one of only 3 proof copies in the world and I want to bu another copy to read so this one remains special.

I am looking forward to seeing how Jay's wonderful characters progress this time.

If you'd like to find out more about Jay then he blogs here and he will be celebrating big time for his 10th book.

Also Something like Summer is about to become a movie in the USA, filming begins this summer and I cannot be more happy for both Jay and Andreas as they move into a new chapter for the books and the characters they've brought to life.

I am sure all Jay's fans will agree he so deserves this recognition and wish him great big congratulations for number 10.